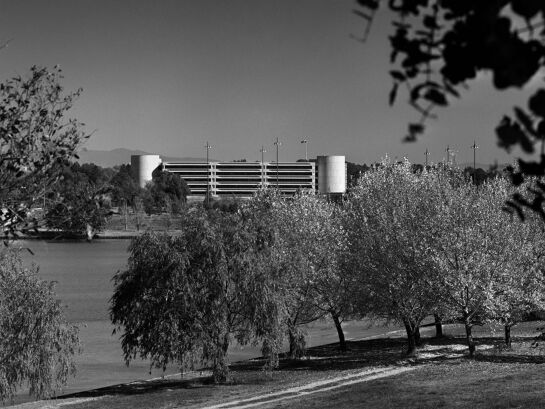 Discover the unexpected Italian affinities of Harry Seidler’s TGO (Edmund Barton Building 1970-74) with Paolo Stracchi, architectural technology lecturer, University of Sydney, and curator of Designed in Italy, Made in Australia: the Australian work of Pier Luigi Nervi.
The Edmund Barton Building, initially known as the Trade Group Offices, was designed by world-renowned architect Harry Seidler and constructed between 1969 and 1974. The building is a significant Australian landmark and is a listed place on the Commonwealth Heritage List. Nervi, one of Italy's most influential modern architect-engineers, created inventive structural projects which explored the plastic potential of reinforced concrete. For the Edmund Barton Building, Studio Nervi designed the famous T-beam and I Beam which became a hallmark of Seidler’s work.
This small group tour will explore the exterior of the building, from publicly-accessible vantage points.
Seidler's TGO is a valuable resource to help understand Canberra’s architectural and cultural history.
This is a small group architecture tour of the exterior of the Edmund Barton Building which has been developed by DESIGN Canberra, in line with current COVID-safe restrictions. Numbers are limited and bookings are essential.
Paolo Stracchi will also present a talk about the Seidler-Nervi collaboration prior to the tour, at the University of Canberra.