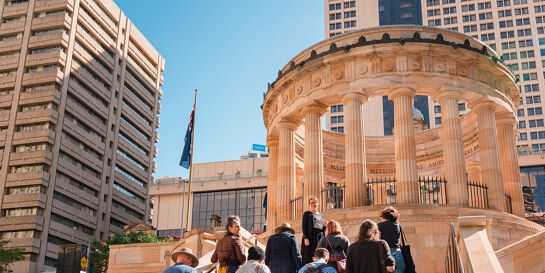 Discover the hidden histories of more than 80,000 American soldiers stationed in Brisbane during the Second World War.

This walking tour will immerse you in a fascinating period of our city’s social history when more than 80,000 American soldiers were stationed in Brisbane during the Second World War. Explore significant historic sites including the headquarters of the Allied Forces in the south-west Pacific, and understand the lasting impact of these events on contemporary Brisbane.

Starting in the opulent foyer of City Hall, uncover the important role the building played during the Second World War, before heading off to uncover locations in our city that reveal compelling stories of wartime experience. Stop at the picturesque Albert Street Uniting Church to learn about Brisbane’s war brides, learn of the tensions between Australian and US troops which caused the infamous ‘Battle of Brisbane’ and complete your tour at the MacArthur Museum, former headquarters of General MacArthur.

Entry into the MacArthur Museum included in booking.

Please note that this tour is operated on demand. A minimum of four confirmed adult or concession participants is needed for the tour be able to go ahead.

Don’t see the date you want? We can arrange a tour for you if you have a group of 4 or more! Register your interest at bookings@museumofbrisbane.com.au